Meet our feature couple, Ashleigh and Lee, based in New York. They’ve been living together for 4 years. Ashleigh’s a teacher and Lee’s an architect, and in their spare time you’re likely to find them at their local CrossFit gym.

Breakfast at Lee and Ashleigh’s

A steak dinner at home

When it comes to food, they try to make sure that their healthy habits from the gym carry over to the kitchen. Ashleigh started experimenting with the “Paleo” diet a few years back (that’s a diet based on unprocessed foods like meat, fish, eggs, fruits, vegetables and nuts – no sugar, grains or dairy allowed), and Lee joined her to show his support. Since then, they’ve gone through phases they would describe as “really Paleo” and others that are less so, and either way, the philosophy informs their approach to a healthy diet.

But like everyone, they have their indulgences, especially Lee. While he tries to steer clear of junk food these days, there are some things he misses, like jellybeans, specifically Trader Joe’s jellybeans. There’s also Coke, another old favorite of his that reminds him very specifically of “hotdogs at baseball games.” And when he’s having a bad day (or thinks he’ll have a bad day) at work, he tucks into a donut to pick up his mood.

They’re also creatures of habit. From their regular workouts to their weekly shopping trip at Trader Joe’s to the dinners they make at home, Lee and Ashleigh like a routine. When it comes to the food they eat, they gravitate towards the same foods and tend to stay in their comfort zone, even if they sometimes catch flak for having bland or boring palates. When they do want to try something new, they seek inspiration in food blogs and Pinterest, and also Paleo cookbooks. While they share similar preferences, there are a couple of things that they can’t agree on, and most of those things can swim. Ashleigh likes to eat scallops, shrimp and other shellfish, a food group that’s still mostly off limits as far as Lee is concerned.

Here are a few photos from their weekly grocery-shopping trip. They’re definitely efficient – I think we were in and out of the store in 30 minutes! That’s an accomplishment by my standards, but then again I never manage to make it to the checkout without a few impulse purchases in my basket. They cook and eat most of their meals at home, so a peek into their shopping cart can tell you a lot about what they eat. On the menu at Ashleigh and Lee’s are plenty of produce, along with eggs, chicken, almond milk, quinoa bread and scallops (for Ashleigh only!). They even have a regular treat – one of Trader Joe’s flatbread pizzas that they pick up and share on Saturdays. 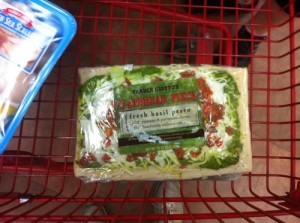 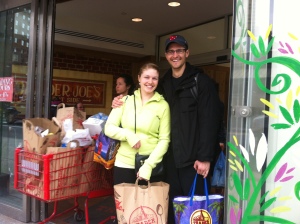 Finished with the shopping!

Moving on from the everyday to the memorable, what are some of the best meals they’ve shared?

Their favorite meals together seem very different on the surface – Ashleigh mentioned making chicken potpies together at home, while Lee talked about the tasting where they decided on their wedding menu. But they did have something in common – both were meals where the decision-making or cooking was a team effort.

While it’s fun to reminisce about favorite meals, we all know that things don’t always go as expected in the kitchen, so we asked Ashleigh and Lee to share one of their mishaps with us.

Moving in with your other half inevitably includes a few surprises, some of which may come to light in the kitchen. I asked Ashleigh and Lee what had surprised them, and here’s what they told me.

Would you and your partner like to be featured on the dinner for two? If so, contact us here!